Operation Skull Rain, the next big update for Rainbow Six Siege, is out next week, and Ubisoft has pulled back the curtain to reveal some more details on the update ahead of launch.

As with previous Siege updates, Operation Skull Rain adds two new Operators and a map.  In what the official Ubiblog describes as their “most destructible map to date,” the new arena is set in a Brazillian Favela.

Who better to tackle said map then the two new Operators, who both come Brazil’s Batalhão de Operações Policiais Especiais, or BOPE.

On the offensive side we’ve got BOPE’s Capitão, who carries an M-249 or PARA-308, PRB92, and frag or stun grenades. He also has the ability to fire a crossbow with “asphyxiating bolts that burn oxygen within a certain radius” or “micro” smoke grenades.

On defense there’s Caveira, who is equipped with an M12 or SPAS-15 as a primary weapon, a PRB92 secondary, and C4 or barbed wire. Her skill is Silent Step, which lets her sneak up on an enemy, immobilize them, and interrogate them to get the location of all members of the enemy team. 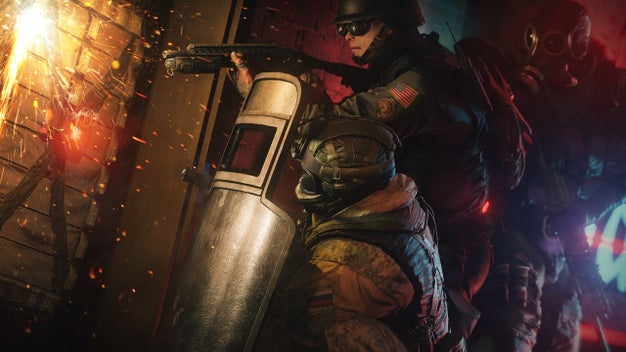 More exciting features will be introduced with Skull Rain as well, including angled grip attachments, a surrender system, and a Tactical Realism custom game mode which does away with kill confirmations and other HUD elements, and adds a “more realistic magazine management” system.

Skull Rain will release for PS4, Xbox One, and PC on August 3rd. The map will be free to all players immediately, but thos e with Siege’s season pass will be granted instant access to the two new Operators. The new Operators are exclusive to season pass holders for one week, after which they will be available to purchase by everyone for in-game currency.