Gamer Assault Weekly got a little taste at PAX South this year with the face-paced, top-down shooter, Livelock. Now, after what seems like a long wait, Perfect World Entertainment and Tuque Games have given Livelock an official release date and everyone can share in its co-op fun.

The above trailer was the announcement trailer and only shows off one character, Hex, the smart-mouthed, trash-talking assault character. However, there will be two others to choose from. Catalyst, the bad-ass support leader, and Vanguard, the philosophical tank, are the other characters you can play as. You can learn more about them (and watch their trailers) at the official Livelock website.

In our PAX preview, we had this to say about Livelock:

Livelock also has an interesting, ever-changing terrain so your fighters can actually shoot in a multitude of directions including up or down on areas with raised platforming. Aesthetically the game is gorgeous. The color in the game is fantastic and very lively. While playing there was more than one time I was distracted by the details in the environment and ended up dying.

The game takes place in the 22nd century when the machines have finally taken over. Players take control of a Capital Intellect, also known as ‘The Few’, which are large mechanical bodies with an uploaded human consciousness. Each character will be armed with a unique arsenal of weapons and special abilities as well as their own personality. It what seperates us from the machines…

Livelock will be officially launching on August 2nd for PlayStation 4, Xbox One and PC for $19.99. A three-pack of Livelock will be available on Arc for $44.99 for groups of players that want to play through the top-down shooter together. 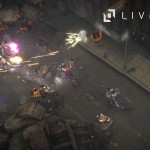 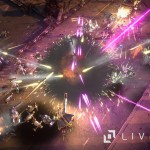 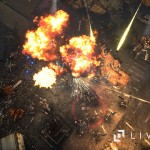 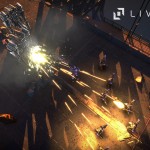 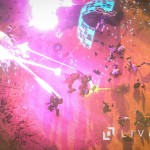 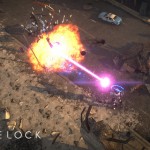