The story in Stories: The Path of Destinies is incredibly thought out and in-depth. It’s impossible to discuss the actual story because the game is comprised of 24 individual stories, each offering a different path for you to take. Each story, however, holds a truth and while you play the game it’s important to really pay attention to the details so you can gather the proper information to move on down another path. The overarching story line follows Reynardo, a fox, as he battles his way through a series of destinies that lead to a final battle between the Emperor’s army and the Rebellion. Along the way you get to meet different characters such as Lapino and decide his fate, or you can play a story line in which you are building a powerful weapon called the Skyripper. Each story is broken down into chapters, roughly 5 chapters per story, and whichever direction you choose to take will branch off depending on the choices you make. This is great because it allows for multiple play throughs.

Each story took me about one and a half to two hours to play through. Though, I did take my time with each story because I felt the narration got lost. The stories are each narrated for you while you play through the chapter. While this is nice, I often found myself stopping to listen to the story rather than press forward down a path and getting into a battle with enemies where the narration fell to the background. However, by taking your time with the game you can have a ton of playtime. With roughly two hours per story, and a total of twenty four stories you get nearly forty eight hours worth of gameplay, which is a lot for an indie title.

The gameplay mechanics in Stories: The Path of Destinies are spot on. While the game appears to be a basic hack and slash, it is far more than that and offers a wide variety of moves you can tie together for ultimate combos. The game gives you four swords to play with, fire, ice, void, and wind. Each sword has it’s own specific magic power that allows you to deal extra damage to enemies. For instance, the fire sword will set nearby enemies ablaze as you slash your way through them, while the ice sword will freeze enemies in place so you can shatter their frozen bodies to bits. I found the magic powers to be really satisfying. Swords are made at the crafting benches which are placed through out the map. As you progress through the game you are faced with different types of enemies as well which make you rethink your strategy. When you first start the game you face basic Raven enemies, however, as you progress you get to deal with Exploders which explode a few seconds after being hit. Exploders come in handy when you are attacked by a large group of enemies because anyone near an exploder will die. Shielded Ravens are also introduced and initially are difficult to deal with. To remove their shields another enemy has to be thrown at the shielded enemy to knock down it’s shield. Upgrades, however allow you to pull shields away from the enemies with a hookshot, which makes them much easier to play against.

The game also includes special enemies like Warlocks and Enchanters. Warlocks deal damage across a certain area so being able to stay out of their range is the best way to evade their attacks. Enchanters, however, give normal enemies a higher defense stat making them much more difficult to take down. Enchanters must be a priority when they appear or else you will spend a lot of time trying to break down enchanted enemies, which I found to be incredibly frustrating and often died from.

The beauty in the battle mechanics, however, was how smooth it was. You are able to use a dash to either evade enemies or to move quickly from one enemy to another, striking them each time you moved. You could dash and weave between enemies, dealing damage, and ultimately finishing them off with a sword to the chest. The mechanics here are very fast, making battles really exciting and fun to play. With seamless transitions between enemies, magic powers from your various swords, and a set of hit types, enemies were often manageable regardless of how many were attacking.

This isn’t to say that the battle gameplay didn’t have any issues, however. While it was fun I often found that the camera angle would swing behind a tree or be put in a very inconvenient position in which I couldn’t see my character at all. In those situations you quickly have to dash back across the playing area to adjust the camera. Additionally, there were a few instances where my hits would not register or enemies would glitch out a bit and remain in the same spot.

Another area I had issues with the hit box not working properly was the loot crates that are spread across the map. There are wooden crates, or pots you can smash to get food or energy. The food regains your health while the energy will power-up your sword magic. In these situations I found myself striking the crate and nothing would happen, I would re-position my character and still had no luck and I would eventually move on.

The game also includes the use of loot boxes. There are red and blue loot boxes which contain materials necessary to craft the different swords including materials like ore, wind essence, fire essence, and ice essence. Blue boxes contained only crafting materials while red boxes include gems. Gems allow for different abilities to be used and can be worn three at a time. Gems are interchangeable as well to suit each players individual preferences. When it comes to abilities players have ability trees they can worth through as well. A new ability point is granted after Reynardo levels up.

While there were a few issues with the gameplay itself, the game really stood out with it’s graphics. Stories: The Path of Destinies is a visually stunning game. It incorporates a unique art style mixed with rich, vibrant colors to create beautiful levels.  The art transcends each different level, offering a different view of the game, each more beautiful than the last.

The game features different environments from bright, lush green forests, to dry dessert lands. There is also an underworld type of area full of giant, red crystals floating about the world. Some areas have gushing hills of lava with others being calm and serene with bright, blue water falls. 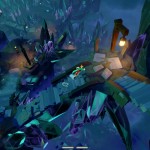 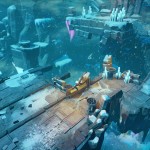 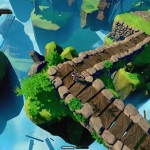 While each area offered something different you do play through them several times. Each time you are able to access a different area, or go through a different locked door you find new paths to take. I didn’t really find it an issue to replay the same levels, but as I did I found myself enjoying the scenery less and just pushing my way through the level to get to the end. It would have been nice to see a bit more variety in level designs but for what is is it ties in really well with the storyline.

The game also features different types of weather which was interesting to see. I’d often catch myself noticing the down pour of rain or the quiet snowfall. This gave the game an interesting atmosphere.

One area I felt the game could do a bit better is with the audio. The music in the game suits the feel, but it’s often lost in the background and I didn’t really notice it. It would have been nice for the game to have a distinct soundtrack that went along with the feel of each level.

Overall, Stories: The Path of Destinies is a beautifully crafted game with an amazing story, seamless gameplay, and stunning visuals. While the game did have it’s faults, they were never bad enough that it took away from the whole experience. With nearly 48 hours worth of gameplay, priced at only $15 it is definitely a game worth picking up.