Zombies,the very word conjures up several different meanings for gamers. Obviously, they swarm and eat you, they blow up and splash goo on you, or scrape your insides until they’re outsides. However in the game Moving Hazard, a MOBA inspired military First Person Shooter, the zombies, although still a threat to you, are also your greatest weapon. The core gameplay in this crazy apocalypse is to weaponize the zombies.

Development began on Moving Hazard by Psyop Games in March of 2015 after a few months of fleshing out which technology was best for the team. They tried focusing on doing something different with the Zombie genre, but keeping a frantic gameplay.

After realizing that there are really two main types of zombie games, either survival or hoard mode, the idea finally came to them. Psyop wanted to merge these two, and have created an experience where you have to survive and avoid the zombies, but there can be a lot of zombies pursuing you as a hoard. Weaponization of the zombies manifest in two ways. First is the Pheromone Attractor Molotov (aka The PAM), which can be thrown into a mass of zombies (seen in the video above) to make them turn on your enemies. Second there is the Targeter, which is a sticky bomb that must hit the enemy to be effective. If it does, it draws the zombie’s attention to your enemy, this forces them to shift focus from attacking you and onto the giant hoard which is now attacking them. Each of these two items can really create a high intensity situation, that is very dangerous, as the zombies can take out players very quickly. Another helpful tool is the LRAD (Modified US Army Long Range Acoustic Device) which is a non-throwable device, but it is “device that hypnotizes zombies and turning them into an allied ‘meatwall.'”  This tool attracts zombies to one spot, creating a massive hoard. You can hide behind it for a short time or you can flank from the other side. Other ways zombies are used could be to use their auto-seek when activated with pheromones and find hidden players playing as snipers, or hiding behind cover somewhere. This forces the player at minimum to re-position, and optimally forces them to fully compromise their situation and get them killed.

The weapons utilized are focused on staying grounded in reality, with the zombies being the crazy and outlandish aspects of the game. There are some not so realistic configurations of guns, such as putting a sniper scope on an LMG, but even this I’m told when speaking to the developers, is a very viable option.

When you first start, your basic loadout will be:

While zombies are a massive weapon, and a prominent feature, the point of the game is in fact to kill the opposite team. Whether you do it via your gun or via zombies, in the end the final total kills determine the winner.

While sitting down with developers, they said a major difficulty while making the game was balance. Many times the most difficult thing to get right on a game is the balance of guns, armor, bullets, drop off, all kinds of portions go into it. One thing that was seen as being a slight issue, was that once one person baits a zombie into becoming their ally, there is no way turn them to your side except for waiting for the time to expire. Now, there is a torch you can pickup and carry, which make the zombies in the are start chasing you. Another balance issue is that as of now, the multiplayer is staying at 4v4. In early development there was discussion about going to 8v8, but Moving Hazard Devs said “there were too many humans dealing too much damage and making the zombies not a factor.” 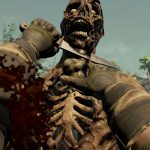 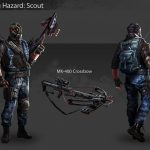 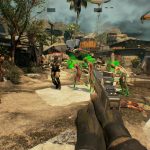 As of now, there is a free demo that is available on, Steam here. You can play until level five to get a feel for the game, and then purchase for $19.99 if you love it! The demo is on the right side of the Steam page.