In a long-awaited livestream with Capcom’s Peter “Combofiend” Rosas and Twitch’s Mike Ross, fans finally have all of the details for this year’s Capcom Pro Tour.

Obviously featuring Street Fighter V, Capcom Pro Tour 2016 will feature a grand total of seventy-two events split into four regions: Asia, Europe, North America and South America. Those seventy-two events include tournaments such as EVO 2016, DreamHack Austin, as well as Canada Cup. Each region will also have twelve Ranking Events and two Online Events, where the winners will be flown to their respective Regional Finals Event to compete for their spot at the Capcom Cup.

“One of our main goals this year is to highlight the top talent in each region and offer more ways for players to get involved with the tour than ever before. With Ranking Events now acting as qualifiers for each Regional Finals, these tournaments now play a much larger role in players’ ability to qualify for Capcom Cup at the end of the year.” –Capcom to Redbull

Like last year, thirty-two competitors will be able to qualify for the Capcom Cup. Eleven will be selected from Global Premier Events, eight will be picked from the Global Point Leaderboards, eight will come from the Regional Point Leaderboards, four will be selected from Regional Finals Events, and one will qualify at EVO 2016.

In order to qualify through a Premier Event, competitors must place first in that event. However, if a player has already qualified for the Capcom Cup and wins first place at a Premier Event, that extra spot will be opened up on the Global Point Leaderboards. This means that if you place second in an event, and first place has already qualified, you will not be automatically bumped into the Capcom Cup as the runner-up.

“In the past, we tried our best to balance out the regions equally with Premier and Ranking events, but this is such a global community with players willing to travel literally all over the world to compete, it made it difficult to showcase top players from each region. We feel we’ve struck a good balance with the global leaderboards ensuring we get the absolute best players in the world at our finals, but also Regional leaderboards that allows us to pinpoint who the best players are in a specific territory.”
–Capcom

As for the prize incentive, the overall prize money being provided is another half million US dollars. The $500,000 will be distributed between the top eight competitors of the Capcom Cup, EVO 2016 and Global Premier Events as such:

Capcom Cup 2016 is slated to take place in December. For the full Capcom Pro Tour schedule, sorted by region and Global Premier Events, you can refer to the following images: 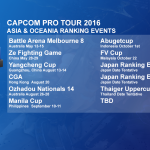 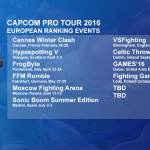 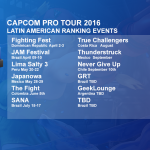 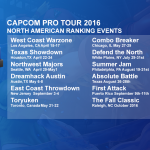 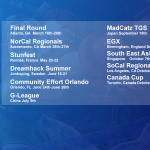