Today during the Tokyo Game Show, Capcom had two huge announcements to make. One is a new, yet old, Street Fighter V character, and the other is a brand new tool call the Capcom Fighters Network (CFN).

The new Street Fighter character, that many fans have been waiting for to return to the Street Fighter series is finally back: Karin Kanzuki. Even though she’s only been in one game, Street Fighter Alpha 3, she was a fan favorite, so Capcom brought her back and gave her a fantastic upgrade.

According to Capcom, Karin Kanzuki polled as the 7th most anticipated fighter worldwide, and was the #1 anticipated in Japan. She’s a “well-rounded character, possessing a wide array of strikes.” A dash move helps her get in close, and her modular V-trigger can be adapted to outwit opponents. The opening strike “possesses over half a dozen different follow ups and variations. After the initial Guren Ken, she is able to transition immediately into an overhead attack, a low sweep, a flying throw, another quick set of strikes, or even a backdash to bait out counterattacks.” She’s not just a set of beautiful golden curls, she’s a quick deadly adversary, so be wary dear player.

The other big announcement was the CFN which is, “a community building tool that will be directly built into the online infrastructure of Street Fighter V.” Some of the things you can do are:

The heat map and player profiles are shown below but they are the two most interesting aspects of the CFN also. With the Player profile:

“The game tracks not only online win/loss records, but fine detail stats such as ‘how many light punches did you land,’ ‘how many throws did you tech,’ ‘in what ways did you win the match,’ and much, much more. We are confident that players will appreciate this new knowledge and use it to push themselves to the next level and rise above the competition.” 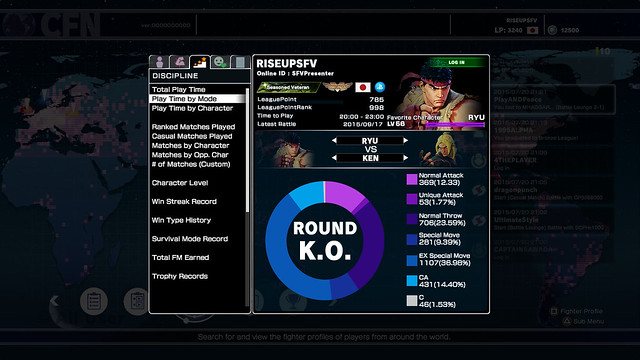 And with the “heat map”:

“Each blinking light on the world map represents a pocket of active users that are engaged in online battles. With the heat map, you’ll be able see where all the action is taking place and even be able to drill down to the individual players who are fighting, in order to check out their profile information, past match history, replays, and even send them a fight request.” 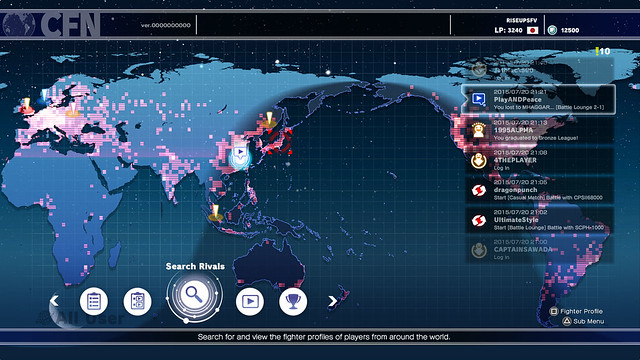 Street Fighter V is announced for a March 31st, 2016 release and exclusively for PlayStation 4. Stay Tuned here at Gamer Assault weekly as the Street Fighter V news unfolds, and of course, for all your gaming needs.