DICE has given us a look at some concept images for the Battle of Jakku free DLC for Star Wars: Battlefront.

For those that don’t know, the battle takes place right after the events depicted on Endor in the movie Star Wars: Episode VI – Return of the Jedi and 29 years before the events of this year’s Star Wars: Episode VII – The Force Awakens. And if you’ve been wondering how that crashed Star Destroyer ended up on Jakku in the trailer for this year’s movie… Well, guess what? This DLC will explain that.

“There’s a David and Goliath theme to this,” said Anton Grandert, a concept artist for DICE. “The epic, huge super structures of the Star Destroyers contrast against the tiny but brave Rebel soldiers fighting the Imperial forces.”

“We wanted to portray a battle completely surrounding you, in every direction. Debris is falling from the sky, telling the story of battles above. On the surface of the planet you can see ground troops as well as X-Wings, all taking part of the fight.” 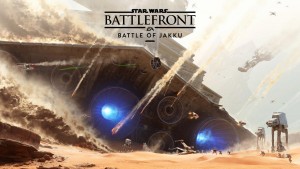 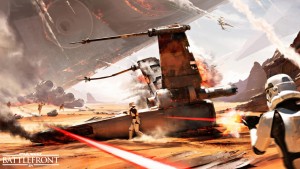 Star Wars: Battlefront launches on November 17 for PlayStation 4, Xbox One and PC. The Battle of Jakku DLC releases free on December 1 for anyone who pre-ordered the game while everyone else can download the DLC on December 8th.