During the Microsoft Xbox press conference they revealed and demoed how to use the Microsoft HoloLens and how it will change the way you play video games.

In the demonstration they used Minecraft. With Microsoft HoloLens and Minecraft you are able to play with friends while they are using a mobile device or playing via console.

The Microsoft HoloLens lets you display your games with new perspectives you wouldn’t have been able to see on a TV screen. With HoloLens you can move the game to a flat surface where it renders in 3D right in front of your eyes. You are able to manipulate the game world with your voice and hands, you can walk around the world and see what lies beneath your village by grabbing the world and raising it.

You can use the same console commands in Minecraft like focus gaze to spark TNT. Saying “lightning strike” will set off bombs as well as turn pigs into zombie pig men.

Microsoft will release more on the Hololens later this year. Take a look at it in action in the demo below. 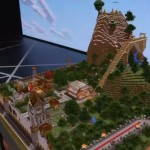 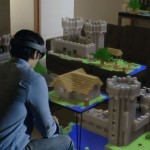 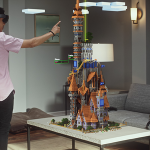