Over this past week at SXSW, Chris Robert’s Star Citizen was the highlight of the gaming expo. Probably one of the biggest highlights that was talked about was the inclusion of a co-op mode that will be included in the final build. Chris Roberts spoke of the escape from the death star in Star Wars A New Hope when Han Solo and Luke were manning the gun and the ship was being flown. This was a very inspirational moment for Roberts. He dreamed of doing something like this with friends from all over the world in great battles in space.

Now this is where it gets even more interesting. What if the friend you want to play with is across the galaxy? As Chris did inform the audience, while manning your ship in Star Citizen, certain operations such as guns will be initially controlled by NPCs. But as you approach a mission with high difficulty, you might want a more experienced hand at the wheel, so to speak. So you ask your friend to lend you a hand, and even if they are in the next room or the next moon, they can drop in to take control of those NPCs. The build they had, unfortunately, couldn’t be shown, as it was still in testing, and even though we never saw it in action it was extensively described.

Another thing that Chris Roberts did touch on at the conference was that there weren’t going to be any quick presses to do anything. If you begin a mining operation or go into a derelict ship to collect hidden caches, you actually must go through the process of exiting your ship and walking into the area you plan on looting or questing through, and then again walk your way back to your ship with your loot and sail it to a port. This in no way was a turn off for me. I love the idea that the game will never leave the first person perspective, that the game will never break away from the immersive experience it is trying to create, that never once will I remember that I’m not a space fairing adventurer. It will take a lot of time and money to make such a game come together this way, but with all the money this studio has been given, I hope it can be done.

When I did get some time to speak with Chris Roberts, I did ask him if there are going to be any cameos or mentions of some of his other games. He smiled and told me, “Oh there will be something”. Does this mean Mark Hammil is going to come back and once again be Lt. Blair? Will we see a reference to the space cat race from Wing Commander the Kilrathi? 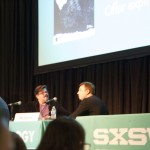 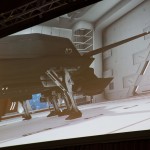 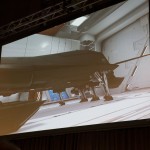 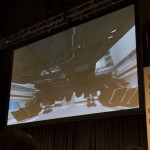 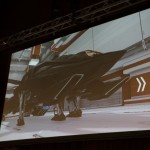