Sequels are a funny thing, with a constant argument of what they should and shouldn’t be. For some players, they’re happy playing more of the same game while others want completely new experiences. Sequels have always been lambasted for deviating from the original too much while at the same time for not deviating enough. This in turn puts developers in a catch-22 situation, where no matter what path they choose there will always be some backlash.

With that in mind, I eagerly loaded up Hotline Miami 2: Wrong Number. I was a big fan of first game, praising the balance it struck between its macabre story, quick paced levels, replayability and addicting soundtrack. If Hotline Miami 2 managed to hit those marks, I would be happy.

And yet, picking up Hotline Miami 2 introduced me to a new kind of beast. It wasn’t bad, it was just different. While its predecessor seemed to be a whirlwind of chaos that happened to come together seemingly by chance, this time around the game feels more deliberate in its approach. It’s a thoughtful and intentional deviation from its predecessor that can unfortunately fall short at times. But despite that, Hotline Miami 2 is still very much an enjoyable game, even if it’s a little rough around the edges.

The core mechanics of the game still remain intact: it’s a top down twitch shooter that has players eliminating enemies on meticulously designed levels, and it feels just as hard to put down as the last one. Players still get graded at the end of each level based on their performance, adding replayability for those that want to challenge themselves. The accompanying soundtrack still stands as the centerpiece, often times being what fuels a player’s desire to play. The tempo and crescendos go hand in hand with the game’s pace, mirroring the action and violence flawlessly. But despite all these similarities, the game still feels like a different experience. First difference players will notice is how the narrative is delivered. Hotline Miami‘s story may not have been the most clearly stated, but its narrative was told in a linear fashion. From the moment players get their first phone call, to the scene where they save the girl, it all flows in a series of continuous events. With Hotline Miami 2: Wrong Number, players may find themselves lost at times as the story jumps back and forth through different scenes. Sometimes the events in a particular level will be revealed to be nothing more than a dream sequences, while others will be part of a film interpretation of the first game’s events. Sometimes we’ll see the levels through the point of view of the mafia only to swap into the jungles of Hawaii a few years beforehand. While these seemingly different story paths tend to converge towards the end, their delivery can leave players feeling a bit confused and cause them to focus on the wrong things.

The first Hotline Miami presented a simple story that while it raised a lot of questions, it did not interfere with the flow of the game.With Hotline Miami 2 we’re often left bewildered at the start of certain levels trying to piece together where we are, and it can be a bit of a distraction. The events of the game cover A LOT of ground explaining the aftermath of the events from the first game and following individuals affected by them. There’s a film being made that’s a loose adaptation of the first game’s events, a group of copycat vigilante’s trying to mimic Jacket’s exploits out of boredom, a detective who’s content with massacring criminals, a writer who’ll go to any lengths to write his book, and we even get a glimpse at Jacket and his friend from the first game.

One of the new characters introduced

With each of these different story paths, players also assume control of different characters. Immediately players will notice another deviation from the original game’s formula, with each character actually having a completely unique playstyle. At times players will take control of an actor in a pig mask, supposedly portraying a the events of the first game in a slasher film. His gameplay sessions are straight forward and offer no real way of customizing his approach.

Another section of gameplay will see players controlling a group of copycat vigilante’s who use masks. Each mask will actually put players in control of a different character, who has a specific gameplay style. Tony, the tiger mask, has the ability to kill enemies with only his fists. However, because of this the player will not be able to use any weapons. Another mask, Corey the zebra, has a dodgeroll that can be used to avoid enemy damage. The scenes with Beard (the convenience/Pizza store guy from the first game) will see him able to use only a standard knife and a preset weapon, unable to pick up anything else. His sessions in particular can become frustrating when enemies drop their weapons, and yet you stand with your empty rifle unable to shoot because you haven’t found an ammo cache to reload.

The level designs have also been redone, with Dennaton Games steering clear of the close confines of the previous game, and instead opting for more variety. A lot of the levels will feature wide open areas forcing players to think a bit more tactfully about their approach. Other levels are littered with breakable glass where enemies can easily shoot through and take out players if they’re not careful. With the inclusion of different characters and new level designs, Dennaton Games tries to create an experience where players have to carefully plan their approach. Unfortunately, that is not the case. On paper it sounds like a great formula: Offer vastly different play styles among characters with new and challenging level design. The idea should work to ensure that no gameplay session is the same, but in reality it does the exact opposite, forcing players into a repetitive baiting method in order to progress effeciently. Because of the limitations several of the characters have in terms of their play style, as well as the sometimes unfair level design, players will more often than not find themselves playing a game of peekaboo with the enemies. A typical level will consist of standing behind a blind corner, popping your head out, and going back into cover waiting for enemies to run into your line of fire. 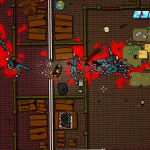 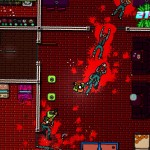 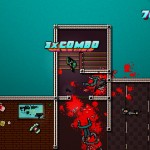 While their intention of creating more diversified gameplay is to be admired, their execution leaves a lot to be desired.

The game also suffers from a couple of bugs that can break the pace of gameplay. The pathing on enemy AI seems to break down when crossing doorways, with enemies constantly getting stuck. Other times items and enemies can get stuck off screen, which can be a big disappointment when you realize your only weapon on hand was thrown at an enemy and ended up resting outside the bounds of the game. One of the game’s most interesting characters also suffers from one of the most frustrating bugs. Ash and Alex are a duo of twins that belong with the vigilante gameplay sections. Players control the two of them as one, with Alex brandishing a chainsaw while Ash follows him around with guns. It’s an interesting dynamic but more often than not Ash was left behind, stuck out of bounds or behind some random doorway. The overall gameplay is still fun, but issues like these keep Hotline Miami 2 from surpassing its predecessor.

Dennaton Games took some risks in an attempt to make a sequel that wouldn’t just feel like a carbon copy of the original, and while those risks may not always pay off, it’s something to be commended. But despite any problems the game suffers, it’s still a fun experience worth engaging in.