PAX South was an incredible event for every indie team that was in attendance, but there were a few developers and games that really stole the show for me. I love seeing the variety and creativity behind all the projects at these conventions, but finding games that resonate with you is quite a magical moment. What makes these moments even more special is getting the chance to talk directly with the game’s creators and understand the passion behind their games.

On the first day of PAX South, I had been enjoying a casual stroll through the aisles while taking in all the sights and sounds of the convention. After a quick match of Sportsball with my friend Ned from TOO DX, I noticed a commotion on the other side of the booth. Being the inquisitive, ADD-stricken game enthusiast that I am, my curiosity had been piqued, so I had to see what was going on.  As I drew closer to the display for Imagos Softworks and their game, Starr Mazer, I was nearly assaulted by a madman who was teetering on the brink of insomnia, a caffeine overdose, and game development-induced insanity. “You have to check out our game! Watch this trailer! It’s everything you could ever want! It’s like having your peanut butter and jelly! Strawberries and cream! Chocolate and bananas! It’s a retro Shoot-em-up in space, and wait for it. WAIT FOR IT! ……. IT’S A POINT-AND-CLICK ADVENTURE TOO! What?! This is crazy! My brain is exploding for the tenth time today!”

As it turns out, this was Don Thacker, the designer, writer, and director for Starr Mazer.

While I was pulled in by Don’s enthusiasm and incredibly entertaining pitch, what kept me mesmerized was the awesome game that had overloaded my sensory and cerebral functions. The truth is that when Don’s brain exploded for the tenth time, mine had detonated as well. I played SHMUPS (shoot-em-ups) for many years, but as I grew older, my need for more narrative-driven experiences increased. With the exception of Housemarque’s Super Stardust HD or Resogun, I haven’t played one of these games for a long time. However, Imagos Softworks has reignited my excitement for this genre with their new project. Taking a beautiful, 16-bit SHMUP and seamlessly combining it with an exciting, humorous story through point-and-click gameplay looks and sounds like a dream come true.

In Starr Mazer, you play as Brick M. Stonewood, a pilot who was found frozen and thawed out after many years. Brick must learn to survive in this strange, new world while simultaneously maintaining his cool disposition, charisma, and his stylish hairdo. Girls, guns, aliens, and epic battles await all who will accept the challenge set before them, but there’s so much more to this incredible game than it’s exciting story. Starr Mazer also has a wonderfully unique design that truly complements its thrilling narrative.

Starr Mazer boasts a wonderful blend of game genres, but it also offers a unique gameplay timeline structure through the power of OMG (open-middled gameplay). With this feature, players will be able to enjoy a new experience with each playthrough. Depending on the player’s choices, the timeline of the story will be altered. Where one timeline may have Brick building certain alliances, another path may lead him into a deadly confrontation with those same groups. The final destination may be the same, but the journey has many paths that the player can take.

Another fantastic feature of Starr Mazer is the dynamic SHMUP battle system. While there are some battles that were designed specifically for certain parts of the story, there are also dynamic battles that will occur depending on the player’s choices in the game. Similarly to how the narrative is guided by the player’s decisions, there will be encounters that happen or are missed because Brick allied with certain people or pissed off the wrong space pirate. I love how this developer has taken a genre that we all love and made it fresh and exciting again.

With Starr Mazer, Imagos Softworks seems to have remedied the issues that I’ve had with so many SHMUPS; redundant gameplay, replayability, and shallow narratives will no longer dissuade me from the games I once loved. Don and his team intended to create something that gave us the sense of wonder we felt when we played similar games as children, but what they are creating is so much more. Imagos Softworks has created something truly special with Starr Mazer that has rekindled my love for SHMUPS. I haven’t had hands on this game yet, but rest assured, I’ll be boarding this ship as soon as it’s ready for launch. I can’t wait to see everything this gorgeous galaxy has to offer.

Check out all the Starr Mazer  GIFs below! 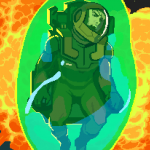