As we all hoped, a special edition of the 3DS XL system themed after Super Smash Bros. will be coming to North America. During the EXPO. this week Nintendo of America confirmed this new system. This was a long awaited announcement, as originally when this particular 3DS was revealed it was only confirmed for Europe, though a recent leak of a Toys ‘R Us ad mostly gave it away.

Similarly to the Pokemon X and Y themed 3DS, this Super Smash Bros. themed XL will come in both red and blue colors with a set release of September the 19th, actually ahead of the games schedule release which is the 3rd of October. The system will be priced at $200 and it will not come with a copy of Super Smash Bros. 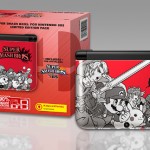 If this sort of Super Smash Bros. news isn’t enough, two new characters were accidentally leaked in an unofficial livestream. The first is the Dog from the old NES classic Duck Hunt. The second is Dark Pit.

It is important to note that these models of the 3DS XL are not the brand new model recently revealed. They will not contain an NFC chip inside.